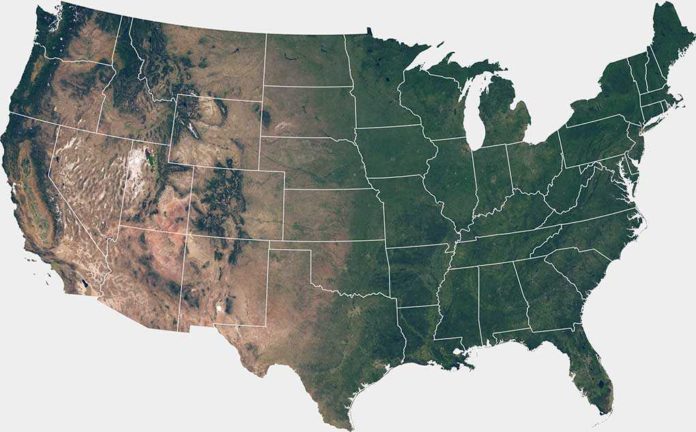 (ConservativeSense.com) – The question of how each of our states got their shape has probably crossed a lot of minds. After all, the United States looks kind of like a giant puzzle, with no two outlines exactly the same. Let’s go over how the states came to be what they are today.

Thomas Jefferson didn’t like the idea that the states varied in size and asked Congress to make any new states similar in size, based on longitude and latitude coordinates. Several additional factors would play into how the states gained their shapes.

Construction of railroads across the country was another factor, and the Erie Canal also played a major role. In 1803, with the Louisiana Purchase, slavery made a serious impact on how states in the deal would be shaped. Again, slavery and its legality would play a part in the shaping of states acquired in the 1818 Missouri Compromise.

Two states, Texas and California, had free rein on setting their own borders due to political power. Both states were also feared to secede from the union, which Texas did temporarily attempt. Of course, Texas is back in the union in modern-day America.

For Alaska, the border was already determined when Russia sold the land to the US. The deal was made during a dispute between Great Britain and Russia. If there had been no dispute, Russia may have very well sold the land to the then British-controlled Canada. As for Hawaii, its landmass was made from a volcano, and it also didn’t get a choice with its boundaries. These two states would be the last two to join the union, making up the 49th and 50th states.

These invisible boundaries might seem arbitrary, but they’re important to the states and lawmakers; taxes, gas prices and laws all depend on these borders. They also help determine school districts and often keep any state disputes at bay. Of course, even today, many state borders have aged and changed.

Some of these states may actually be bigger or smaller than they appear on the map, and in some places, state lines are still under dispute. It can take some serious digging and research to find the exact borders set by the Founding Fathers and pioneers. In part, we have them to thank for the United States as we know it today.