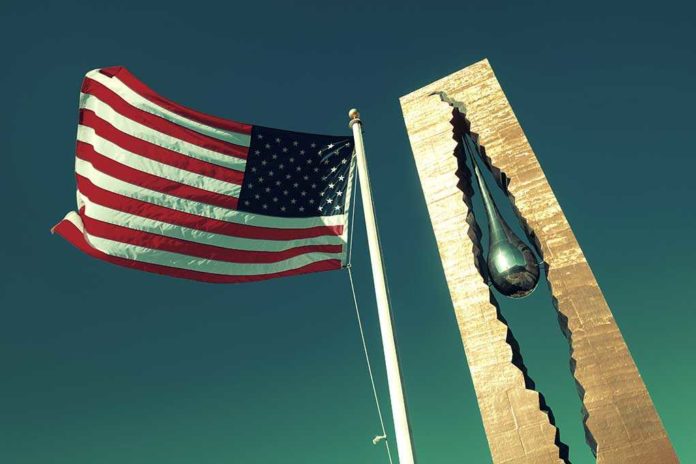 (ConservativeSense.com) – The world has struggled with the scourge that is terrorism for decades. Even so, not many terrorist attacks are as recognized as the September 11th attacks in 2001. The World Trade Center was struck by two planes, one to the North tower and one to the South tower. The day was tragic, but it did inspire people around the world to band together and one Russian sculptor to create a beautiful piece of art.

To the Struggle Against World Terrorism

Zurab Tsereteli, Russian painter, sculptor and architect, created his piece as a memorial to everyone lost during the 9/11 attacks. The project cost a total of $12 million, all of which Zurab paid for himself. The 40-foot sculpture is made from bronze and stands as a single structure. In the middle is a 4-ton teardrop made of nickel and the base for the artwork was made of polished granite; the names of the victims of terrorism are inscribed into the stone.

The nickel teardrop represents not only the people who have fallen, but also hope that we have a future free of terrorism. Beside the monument is a slate of black granite with a simple quote etched into it: “Gift from the People of Russia — President Vladimir Putin.”

Everything Starts as an Idea

For Tsereteli, the inspiration for the “Tear of Grief” came when he was on his way to the Academy Arts and passed the American Embassy on September 11th, 2001, just after watching the horror unfold on TV. He witnessed the mass of people gather outside the embassy to pay their respects and mourn the loss of life; this image is where the tear would come from.

The artist visited Ground Zero shortly after the attacks took place, and he knew he wanted to create a memorial for the people who had lost their lives that fateful morning. Furthermore, he didn’t want to build the monument on top of the fallen, so he was off to search for a suitable site.

After talking to some friends in the area, Tsereteli decided on a location in Bayonne, NJ — a waterfront property that the Twin Towers once served as a backdrop to. From here, the towers looked as if they were one building when they stood above the New York skyline, inspiring the artist to create the sculpture as one piece.

Tragedies such as the one that took place on 9/11 are unforgettable, as are the reactions of leaders from around the world. We may have our differences, but in the end, we’re all in this together. To see terrorism end is a goal for much of the world, and perhaps one day we’ll live in a world where such evil no longer exists. Just as Tsereteli’s sculpture embodies, we can hope this is the case for future generations.