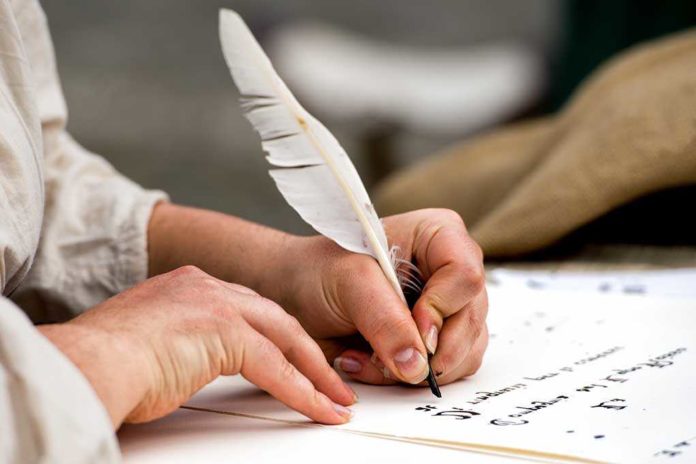 (ConservativeSense.com) – People unfamiliar with Francis Scott Key are missing out on an important piece of US history. At the time, when Key wrote his poem, he had no idea he was creating what would become one of the most iconic songs ever to hit the country. Let’s take a journey back to how “The Star-Spangled Banner” came to be.

“The Defence of Fort M’Henry”

On September 14th, 1814 Francis Scott Key wrote the poem “The Defence of Fort M’Henry.” It wouldn’t be until 1931 that this poem would be set with music and become known around the globe as the National Anthem of the United States. The poem-turned-anthem also saw its name changed to “The Star-Spangled Banner.” The inspiration for his poem was a lone American flag that had remained standing after the 25-hour British siege on Fort McHenry.

Before the bombardment of Fort McHenry, Francis was searching for a friend of his, Dr. William Beanes, who had been captured by British soldiers. Key eventually found his friend on a British ship in Baltimore and negotiated the man’s release. However, British officials wouldn’t let the two go until after the attack on the fort. Key and Beanes were able to return to their ship, but under guard, so the two watched as the British bombed Fort McHenry.

Inspiration for the Poem

Watching the scene unfold, Key was sure that the attackers would soon overpower the Americans. Be that as it may, when day broke, he saw the American flag still raised over the fort, indicating an American victory; this sight spurred the passage “the dawn’s early light.” Throughout the night, all anyone could see was the red glare of shells being hurled at the fort, inspiring the lines “And the rocket’s red glare, the bombs bursting in air, gave proof through the night that our flag was still there.”

Key’s poem contained four simple verses, and only one is in today’s National Anthem. The poem would eventually be combined with the music to a song titled “To Anacreon in Heaven,” which ironically has English origins. In 1916 President Woodrow Wilson requested the song be played at the open of all official events, and on March 3rd, 1931, “The Star-Spangled Banner” became the official National Anthem of the United States.